In the past decade, food at sporting events has transformed from hot dogs and French fries to gourmet fare. We’ve led this transformation—bringing innovative, chef-inspired dishes to big events all around the world. This February, we will bring our innovative spin on gourmet food to U.S. Bank Stadium in Minneapolis.

But feeding tens of thousands of people is no small feat. Providing an exceptional culinary experience on game day—and doing it at scale—requires precise planning, experience and number crunching. It means understanding what customers want and expertly crafting menus that can be scaled to meet the needs of tens of thousands of fans and 2,500 staff.

In reality, we start feeding fans, volunteers and staff weeks before the game. In fact, it’s up to us to plan to feed staff and guests at events we’re hosting from the beginning of January through the big game and beyond. That means thousands of boxed lunches and hot meals, and a lot of planning and logistics to ensure everyone is energized in the weeks leading up to the big game.

On game day, events begin early—long before the players hit the field there are tailgate parties catered by us. Inside U.S. Bank Stadium, chefs and staff will begin prepping well before the sun comes up. And when the game begins, fans get ready to eat and drink as food encompasses the entire game day experience.

We’ve partnered with local chefs to infuse the flavor of the Twin Cities into food at this year’s game. Together, we are developing dishes based on some Minneapolis favorites that will please hometown fans and give out-of-towners a taste of what the Bold North is all about, including state fair favorites like turkey legs, porkchops-on-a-stick and cookie dough cones and barbecue, burgers and brats to give fans a taste of the Twin Cities.

In addition to foods that are familiar to Minnesotans, we’re bringing some flair and flavor from the two teams playing in the big game, including two sandwich options that pay tribute to each team. This creates another challenge—how do you feed nearly 70,000 hungry fans when you find out which team-inspired dishes you can feature just two weeks in advance? Our chefs create mock menus and food orders, and keep a close eye on the playoffs.

During the game, fans watching from club boxes and suites will experience some of the best U.S. Bank Stadium has to offer. Fans are fed in courses to provide the freshest food possible through every sack, fumble, miraculous catch and even the entertaining half-time show. This allows chefs to expand their menu offering and offer fresh, hot food throughout the night, rather than just the beginning of the game.

Giving the Fans What They Want

Fans drive the food experience during any event we create. By gathering feedback through surveys at the stadium and beyond, and analyzing sales, we’re shaping menus from local bakeries and restaurants and serving up exciting dishes like walleye chowder, smoked brisket mac n cheese and Minnesota maple nut goodie bread pudding.

These dishes don’t just show the unique flair of the Twin Cities, they provide fans with an unexpected gourmet experience during the game.

To scale for the big game, we look at data from our biggest games here at U.S. Bank Stadium, as well as past data, to determine just how many pounds of bratwurst, fried chicken, short ribs and nachos we’ll need. We also combine that with data about where our fans spend their time before the game—whether it’s at a fan festival or a sponsored tailgate. By tracking this data, we can determine just how hungry fans will be before they arrive at the stadium.

Of course, feeding tens of thousands of fans and doing it in a responsible way is a challenge. That’s why our team at U.S. Bank Stadium will work to divert more than 90% of stadium waste during the game and beyond through the Rush2Recycle program. Fans and staff will recycle bottles and cans, compost organic materials like food waste and service ware, and repurpose signage and construction materials.

All of this to ensure that fans leave the game feeling as energized as they did when they arrived. 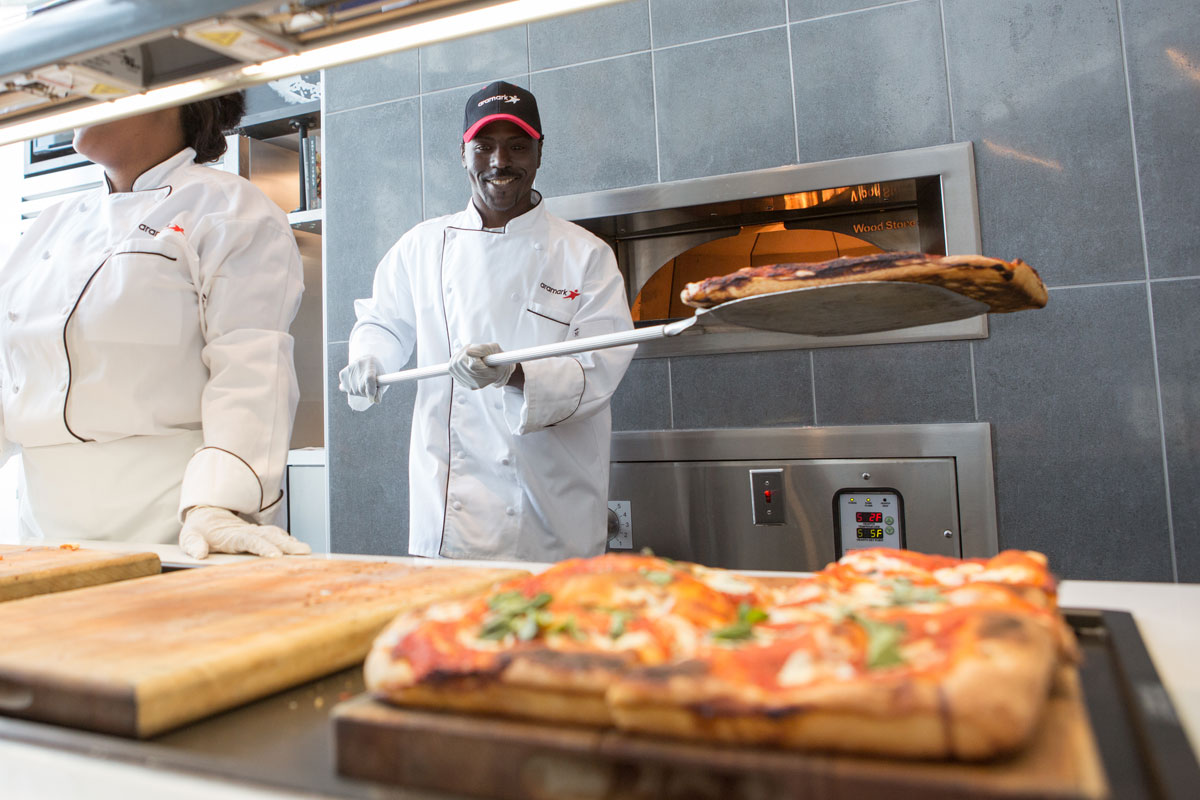